Oklahoma Students Make Their Mark Learning to Program with Rover

John Honeycutt, the only science teacher at Keota High School in rural Oklahoma started the semester determined to develop his students’ leadership skills. He assigned the junior class a special project where they would work in pairs on a “proof of concept” that they would later demonstrate to the class.

Two of his students, juniors Justin Hickman and Brooklyn Martin, were eager to use the new TI-Innovator Rover, a robotic car that students program using a TI-Nspire CX graphing calculator. The high school received 10 Rovers last fall through participation in the GEAR UP grant program at Eastern Oklahoma State College.

“I literally gave the students the Rover and the guide book and said you guys figure it out,” said Honeycutt. “It took them 3 or 4 days to figure out how to draw a line, but when they did, they were so proud of themselves and the beams on their faces were quite beautiful.” 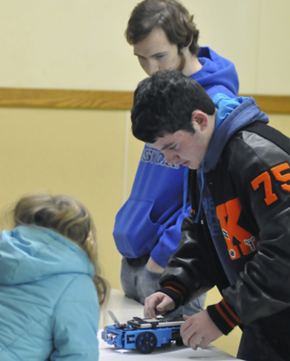 Keota junior Justin Hickman (right) inspects a TI-Innovator Rover while junior Trevor Doss (back) looks on. Hickman is one of two students primarily responsible for programming the calculator that powers Rover to draw a robot.

Hickman’s teacher was so impressed that he invited local media to the school to watch as the juniors lead Keota third graders through the program that uses Rover to draw a robot. Much to the excitement of teachers and students, The Oklahoma Welcome, a local newspaper, wrote a news story the event, giving the students some well-deserved recognition: Keota students get hands-on with new TI-Innovator Rover technology. 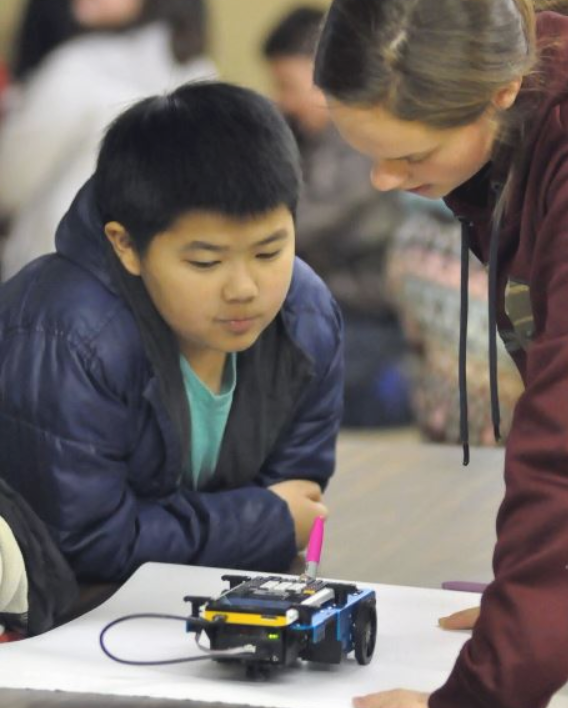 “We are a tiny little school, isolated from the large metro areas, and now these kids know that someone is paying attention to them and they are being acknowledged,” said Honeycutt. He said all of the students, from elementary school through high school, enjoyed the satisfaction of watching a device they helped to program draw something.

“There is an adeptness that this particular generation has towards technology,” said Honeycutt. “This handheld – the size of it, the shape of it, the way that it works – it looks and feels very similar to things that my students are comfortable with anyway.” 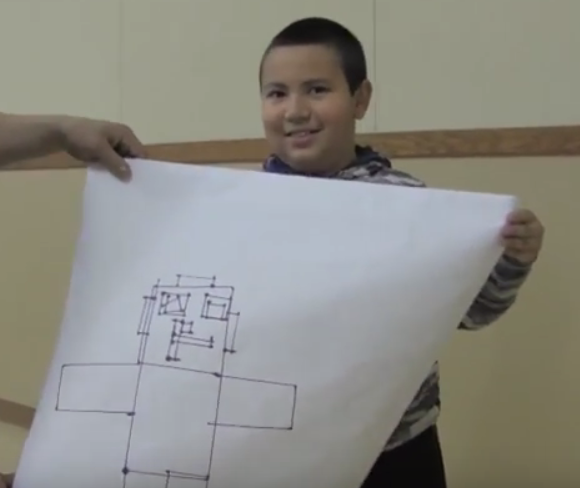 A Keota elementary school 3rd grader shares his robot drawing with his classmates.

Honeycutt hopes the drawings students took home will serve as a tangible memento of an exciting moment in the school day that they can talk about with pride for many years to come, elevating their interest in STEM and better preparing them for future careers.

To use the program students wrote for their TI-Nspire CX and Rover, download the .tns file here.