Which Texas Instruments (TI) Calculator for the ACT® and Why?

TI Calculators Prohibited on the ACT®

Calculators with built-in or downloaded computer algebra system (CAS) functionality are not allowed, including:

Note: The TI-Nspire™ CX graphing calculator is permitted if not marked CAS.

TI Calculators Allowed on the ACT®

Per the policy, the following types of calculators are permitted, but only after they are modified as noted: Calculators that can hold programs or documents; remove all documents and remove all programs that have computer algebra system (CAS) functionality. 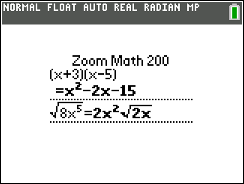 Zoom Math 200, or any app or program that gives you algebraic solutions, is not allowed on TI-84 Plus or TI-Nspire™ graphing calculators when taking the ACT® exam.

How does the ACT® enforce the CAS functionality portion of their calculator policy? Right now, it is not strictly enforced. In other words, test administrators do not come around and check or clear calculators. TI-84 Plus calculators have TestGuard capabilities, and TI-Nspire™ graphing calculators have Press-to-Test capabilities. However, as of 2018, the ACT® does not use these built-in restricting capabilities. Instead, the CAS functionality portion of the ACT® calculator policy is enforced using the honor system. The test administrators read this policy to students before the ACT® exam, and hopefully students will comply by deleting any offending app or program from their calculator.

TI provides a nice chart that summarizes which calculators are allowed on all kinds of standardized tests.

Need a new Graphing Calculator? Find where to buy here.

About the author: Jeff McCalla, author of “TI-84 Plus Graphing Calculator for Dummies,” 2nd ed. (Wiley, 2013) and “TI-Nspire for Dummies,” 2nd ed. (Wiley, 2011), teaches math at St. Mary’s Episcopal School in Memphis, Tenn. Jeff received the Presidential Award of Excellence in Mathematics and Science Teaching in 2009. Follow him on Twitter @jmccalla1