Middle school gifted and talented students at Travis Vanguard Academy in Dallas were among the first in the world to get their hands on Texas instruments’ first robot for the classroom, the TI-Innovator™ Rover. Engineers at TI designed the robotic car, best known as Rover, to help middle and high school students make connections across math, science and engineering and to show them that learning to program can be fun. 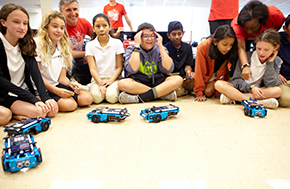 “I’m not really the most tech-savvy person and I didn’t think I was going to understand this very well,” said Hope Stanley, an eighth-grader at Travis Vanguard Academy. “But this was really easy and it was actually really fun.” Rover connects to the TI graphing calculator that many students already have and the TI-Innovator Hub and uses coding, math and science logic to do things like draw, crash or even dance. 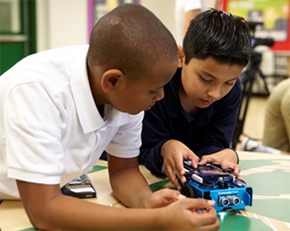 At Travis Vanguard, students were divided into pairs and given 30 minutes to program Rover to dance. Given the simple programming language on TI graphing calculators, the students were able to get started with Rover right away.

“I learned how to code and program which I have never done before and it’s super exciting, as it may be a new career option in the future,” said seventh-grader, Sarah Zeko.

“I mean, I love math, and I always thought I would do math in college, but didn’t think I’d ever do coding or programming until today.”


By the end of class, students had Rover moving and grooving to the music, and so were they. “If I were a teacher I would give Rover a 100 and some bonus points,” said sixth-grader, Emma Blackburn. “It was really interactive and I had a lot of fun.” That’s music to the ears of Peter Balyta, president of TI Education Technology and leader of a corporate crusade to get more students interested in engineering, especially girls. “We created Rover as an easy on-ramp to robotics, to help all kids see that coding and the basics of engineering can be easy to learn and fun," said Balyta. "After today, I’d say mission accomplished.”

To learn how to get your hands on Rover, and to check out some of the activities for getting started, click here.