You only get one 'first day of school' – use it wisely

You know the old saying, you never get a second chance to make a good, first impression. The same holds true for the first day of school.

At my school, classes are shortened on the first day from 55 minutes to 25 minutes. What to do? Here are a few of my favorite tips to help make your first impression memorable.

Introduce yourself and make a connection with your students. Get to know each other with some questions like, “What’s a word that describes you, that starts with the first letter of your name?” I get answers like, Cool Caroline, which end up helping me remember their names much easier. Another one of my first day favorites is to give each student Play-Doh and let them make something that describes what they did that summer. After all, who doesn’t like playing with Play-Doh?

It may not be the most exciting part of the day, but review rules and expectations with your students from the start. Help students understand how your classroom rules work and what is expected of them.

3. Break out a children’s book:

Last year, my friend and elementary school teacher, Jill Gough, suggested I read a children’s book to my students, as that’s what she does on the first day. I was hesitant, at first, because I teach high school students. The first book that came to mind was “Goodnight Moon.” And, as you can imagine, the last thing I wanted to do on the first day was to put my students to sleep! But, with a little help from our school’s awesome librarian, I discovered a Deborah Diesen book, “The Pout – Pout Fish Goes to School.”

She helped me check out the eBook so that I could project it on my classroom screen and read it aloud to my students. It became clear, rather quickly, that I had my new students “hooked.”

The book hits a lot of the themes that I want my students to embrace. In the story, Mr. Fish feels like he doesn’t belong because he has trouble drawing a rhombus and doing long division. He really wants to give up. His new teacher, Mrs. Hewitt, and his classmates come alongside and encourage him. They believe in him. He learns that with practice, he can do it! Of course, everything works out in the end – it’s a children’s book! The thing that I like most about this book is that Mr. Fish’s mindset towards learning changes. The same applies for students. If students have a growth mindset, there is no limit to what they can learn in a given year.

4. Break it down in writing:

From day one, I want all of my students to know their math ability is not fixed. I’ve been inspired by Jo Boaler and Carol Dweck and want my students to know that there is no such thing as a “math person” and “not a math person.” EVERYONE can learn math! Mistakes help our brain grow. And, if you work at it, you can be successful.

As the first night’s homework assignment, I ask students to journal their thoughts about math. To give them a little more structure, they select a picture from a page of pics I supply them. Their assignment: explain why they chose a particular picture and how it represents their feelings about mathematics. Some of the pictures show struggle, others show triumph and others just about everything else in between! Be prepared for spelling and grammatical errors (as you may notice in this example from one of my students). 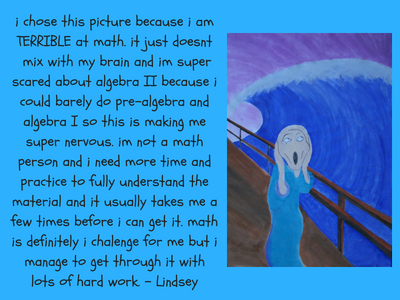 Lindsey was an honors math student at a strong academic school. She was pretty good at math. Yet, she describes herself as ‘not a math person.’ Why did she think that? There might be other reasons, but she stated that it takes her a few times to get it. Her reasoning was that since she doesn’t always get math easily, she must not be good at it. I want students to have the mindset that everyone can be good at math, if they work at it!

Sure, I know it will take much longer than one day to change a mindset. But, it’s important to start off the school year on the right foot to accomplish our goals in math class. So, take a deep breathe, and go make that first day of back to school impression that will set up your classroom for successful learning.

About The Author: Jeff McCalla, author of “TI-84 Plus Graphing Calculator for Dummies,” 2nd ed. (Wiley, 2013) and “TI-Nspire for Dummies,” 2nd ed. (Wiley, 2011), teaches math at St. Mary’s Episcopal School in Memphis, TN. Jeff received the Presidential Award of Excellence in Mathematics and Science Teaching in 2009. Follow him on Twitter @jmccalla1.