Computational Thinking and Coding in the Classroom – Sharing Inspiration 2021

Our guest speaker Ramon Moorlag is president of the Dutch Computer Science Teacher Association I&I and teaches at Pierson College at 's-Hertogenbosch. The Netherlands was one of the first countries to connect to the internet in 1988 and has been developing computer literacy within the curriculum ever since.

Moorlag talked about access to knowledge, inspiration and digital literacy for life. Using examples such as controlling the giant flood gates for the harbor in Amsterdam, he explained how feedback and control could play an important part in algorithmic thinking. Computer literacy is now a key element in the Dutch school curriculum and presents a serious challenge as to how to develop this across subjects. One idea has been project clusters in which various subjects contribute to a single task such as making a hand prosthetic or designing a mockup of the maglev train. He has been using the TI-Innovator™ Rover with his classes to motivate students when learning Python, but warns us all not to use permanent markers to draw diagrams on the floor! He is not a fan of expensive toys such as the NAO Robot which he says tend to be bought and put on a shelf. Whereas devices such as TI-Innovator™ Rover or the BBC micro:bit can be used in all sorts of ways to engage students with learning.

Moorlag summed up by saying that computational thinking needed careful positioning within the curriculum and that all of us need to keep up to date to maintain student interest. "We all need to fight fake news and ensure that our students learn what tools are available to distinguish between fact and fiction. Above all, we must ensure that we maintain or increase the amount of enjoyment to be experienced within student learning," he said.

Cathy Baars is a physics teacher at Martinus College and is now also working with Utrecht University on a project called U Talent. This is all about developing materials for enriching the curriculum for gifted students, but in this session, she talked about the way in which computational thinking can help develop reasoning skills in students.

After noticing disappointing exam results from her students, Baars carefully studied the examination rubric to find out where they had gone wrong. A small sentence showed that reasoning was to replace calculations to the extent that the roles of calculating and reasoning were reversed. Much more emphasis was being placed on students’ ability to reason and explain physical phenomena.

Baars decided that a systematic approach to the problem might help. Specifically, she posed the question: “Can computational thinking help physics students to reason better?” To address the question Baars adopted a process she called Systematic Problem Analysis, or SPA.

By using this structured approach, students were better able to understand what the different variables and constants in a physics formula actually did when they were altered in the real world. This helped them to answer questions where they were required to explain “what would happen if...?”

Alexandre Gomes (T³ Portugal): STEM Projects as a Vehicle for Integrating Computational Thinking Into the Curriculum

Alexandre Gomes is a physics and chemistry teacher at the Agrupamento de Escolas Oliveira Júnior in Portugal. He started by telling us that computational thinking was an explicit requirement in the school curriculum, certainly in Portugal, and that there now a European framework which set out the digital competences required of educators.

After describing the range of digital competences required (22 in all), grouped in six different areas, Gomes described computational thinking as all those skills involved in the construction of algorithms. One approach to teaching about computational thinking is to use project work and involve as many departments as possible. This is important if the student is to be able to articulate knowledge from different disciplines and allow them to see that programming is not an end in itself but is a tool which will provide access to knowledge. 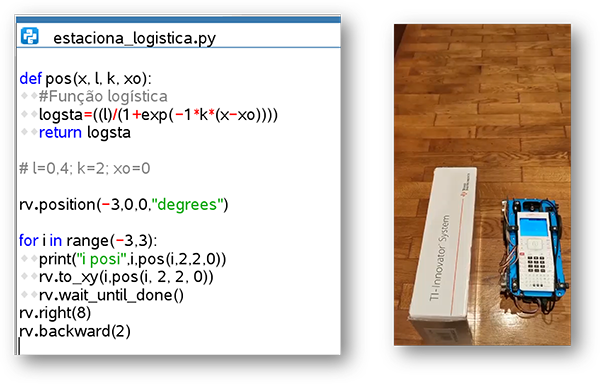 Gomes described two such projects using the TI-Innovator™ Rover. One was the design and real simulation of a robotic vacuum cleaner and the other was about automatic parking. In both cases, students were required to break the project down into many parts and tackle each part independently. In both projects we were shown how mathematics could play a key role, using the law of cosines in the case of the robot vacuum cleaner and using a logistic function to model the path taken by the robot when parking.

Tonguç Özdaş, Uğur Mert and Yunus Emre Doğan all teach mathematics at three different schools in Istanbul, Turkey. They are all passionate about STEM and digital skills and have kickstarted the creation of T3 Turkey. Their title “From CBR to TI-Innovator™ Hub, Metamorphosis of a Maths Teacher” could equally well apply to the metamorphosis of the science teacher.

Computational thinking is described by Doğan as being a blend of decomposition, pattern recognition when looking at data and the creation of algorithms to provide a set of rules to be followed by the computer.

Mert picked up on the way in which data collection has changed, being a pen and paper process before computers appeared. Originally, data sets were provided to the entire class eliciting exactly the same response from each student. Then experimental error was introduced by generating data manually and finally, data can be collected by machine, in this case the CBR.

Özdaş moved on to the TI-Innovator™ Hub and talked about the way in which data collection can now be programmed. Two examples of temperature collection and distance collection were shown to reveal how easy it is now to collect a data set by programming a sensor.

Decomposition of problems and creation algorithms
All our presenters have talked about the decomposition of problems and the creation of algorithms. Coding becomes essential when wanting to communicate the algorithm to the machine. In this way, computational thinking has the potential to make problems more accessible to solution by students at all levels. Cathy Baars has even shown that computational thinking can be used to support students’ reasoning skills. Finally, it should not be forgotten that it is the connection between the scientific model and the mathematical model which makes for a good STEM activity. And it is here that our presenters made a good case for introducing project work in order to provide an authentic environment for students to carry out computational thinking and coding in the classroom.