Hope’s understanding of heat and hope for tackling climate change

Understanding heat is central to understanding global warming. Let me introduce an experiment that was first conducted in the 18th century and is still fun to do with your chemistry class or integrate in a STEM project today.

In my collection of artefacts is a strange cylindrical affair known as Hope’s apparatus (possibly invented around 1800), consisting of a central cylinder for water with two openings on top and bottom for thermometers. The trough around the middle contains a freezing mixture so that the water in the central cylinder is chilled in the middle.

The chilled water sinks to the bottom until it reaches 4° C. At that point, the water in the bottom remains at 4° C and the water at the top continues to fall in temperature until it freezes. One of the anomalous behaviours of water, which chemists of course know, is due to the hydrogen bond. Water has a maximum density of around 4° C.

The mystery of heat

This was a great mystery and, at the time, Thomas Hope (Scottish Chemist 1766–1844) offered no explanation for the strange behaviour of water. But Count Rumford, aka physicist Benjamin Thompson (1753–1814), used it to show that the caloricists were wrong to think that heat was a fluid. At that time, the expansion of materials as they were heated was explained by assuming that the fluid heat made them swell in size. But water contracts as it is heated from 0° C to 4° C, and the caloricists had no explanation for it. You would think it obvious to anyone that as ice floats the water must have expanded just before it froze. However, the famous scientist John Dalton (1766–1844), father of the atomic theory, actually wrote a paper proving that water did not achieve a maximum density just before it froze — extraordinary!

Rumford suggested around 1800 that heat was due to internal motions which we would now understand as molecular motions and so was moving towards new ideas about heat and energy. He had enough data to calculate the mechanical equivalent of heat (4.2 J/calorie), but this remained for James Joule (1794–1858) to announce in 1843.

Understanding heat, of course, is central to understanding global warming, and the experiment carried out by Hope is easy to carry out in a school laboratory using two temperature probes and a beaker of water with floating ice. Chill the water to about 5° C, stir it, then insert the probes and start recording. Throw some ice cubes onto the surface (I used an ice pack held on the surface) and watch for about 10 minutes. 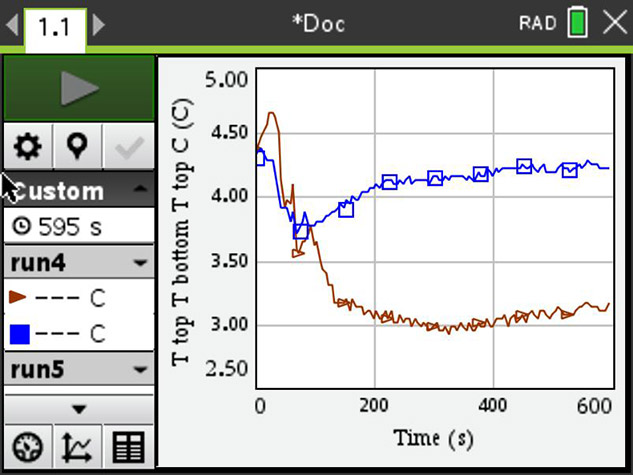 The screenshot shows the starting temperature of about 4.5° C, and after a little turbulence, when the ice pack is put in, the temperature separates — blue at the bottom of the beaker and brown at the top. The bottom stays warm, the opposite of what you would expect. Biologists are of course very grateful for this particular property of water as there would be no life on Earth without it.