This activity extends the “Teaching Foundations of Computer Science With Python on TI-Nspire™ Technology” workshop to study additional topics from computer science with the support of the TI-Nspire™ CX II graphing calculator with Python coding technology. We will explore Do While loops, a form of post-test loop that always runs at least one time.

Also, you'll want to have the following handy:

Unit 4 Activity 3: The Do While Loop

A great introduction to this loop structure can be found in Unit 4, Activity 3. Start by working through that activity, then read through the following discussion of main ideas from the activity. 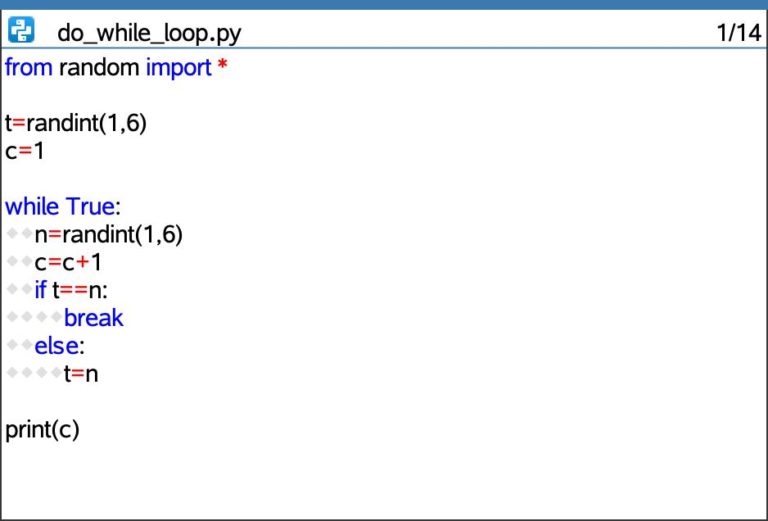 Quick refresher: How does the randint(1,6) syntax work?

Tech tip: randint() can be entered via the
TI-Nspire™ keyboard or from Menu > Random.

Tech tip: The break command can be typed in via the TI-Nspire™ keyboard.

How does the do_while_loop.py program at the bottom of page 1 work? This program may not be intuitive. Explain it aloud to yourself or a colleague, then read through a sample description below.

This program starts by assigning a random number from 1–6 to variable t and storing the value of 1 to variable c. c will be used as a count variable in this program to keep track of how many numbers are generated before two consecutive values are the same.

Next, a Do While loop (modeled using a While loop with a condition of True) kicks in. Within the loop, a new variable n is created and it’s assigned a random number from 1–6. Also, the value of c is increased by one to show that a new number has been randomly determined. Now c has a value of 2, representing that we have found 2 numbers so far.

Next, the program checks to see if t and n have the same value. Why? The program is checking to see if n (the new number) is the same as t (the previous number). If they are the same, that means that the program generated two consecutive numbers that are the same. If this happens, the command within the If block will run — specifically, the break command will make the program exit the While loop and move on to the print command.

So, what happens after the else command executes and the value of n gets saved in t? Well, we’re at the end of our loop, so the loop will circle back to its beginning. (Since the conditional for this While loop is True, it will keep running until it encounters a break command.)

Then, what gets printed? The value of one of the numbers? No, c, which represents how many numbers we needed to randomly calculate before we got two in a row that were the same.

This is a great place to make some predictions: 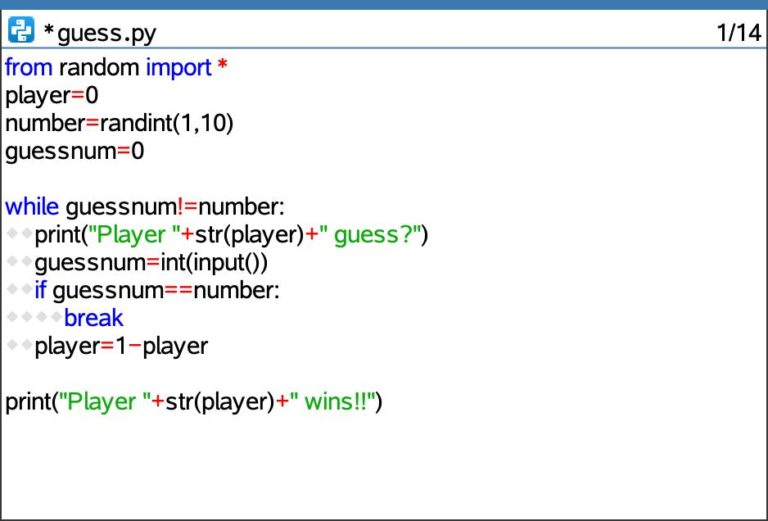 How does the syntax of the print(“Player ”+str(player)+“ guess?”) line of code work? What is each part of this statement doing?

Take a minute to explain this syntax aloud to yourself or a colleague before reading the discussion below.

This line of code will print a message on the screen to the user that says Player 0 guess? or Player 1 guess? depending on whose turn it is. The program uses the variable player to keep track of the 0 and 1 values for the two players’ names.

The + symbols concatenate the various parts of the string to be printed. The str() command converts the integer value stored in the variable player into a string variable so that it can be concatenated (joined) with the other strings in the print statement.

How does the syntax of the guessnum=int(input()) line of code work? What is each part of this statement doing?

Again, take a minute to explain this to yourself first before you read the following discussion.

On the right side of the equal sign, the int(input()) command is prompting the user for input and then converting this input into an integer because numeric input is expected of the user. This value that the user enters will then be stored in variable guessnum; this is accomplished by the use of the variable name and then gets (=), the assignment operator.

Here are two extensions to try out:

Exploring the Do While structure

As discussed in the above activity, Python doesn’t have an explicit Do While loop structure, but we can model this structure with a specially crafted While loop. Why do this? Do While loops are powerful structures within the larger domain of computer science; it’s important to build our familiarity with these loops and how they are similar to and different than traditional While loops.

After working through that activity, consider the following loop. What do you think the output of this loop would be? How do you know? 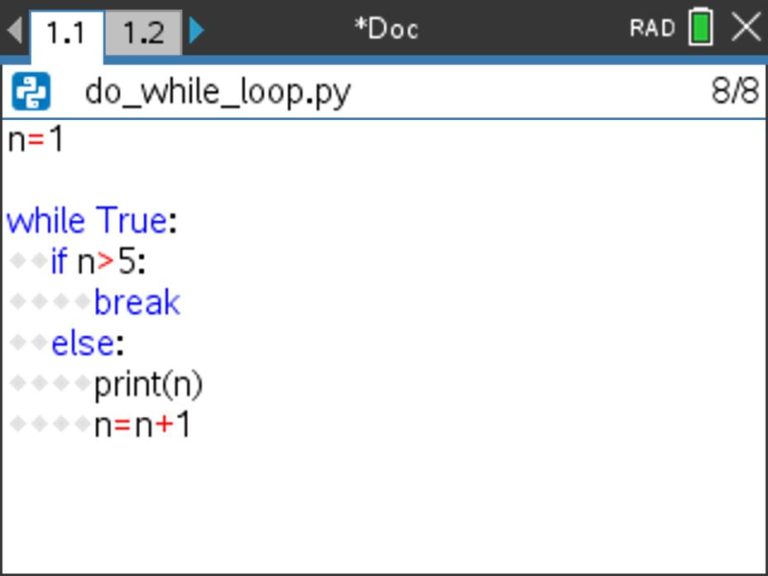 Check your thinking with the output shown in the following screenshot: 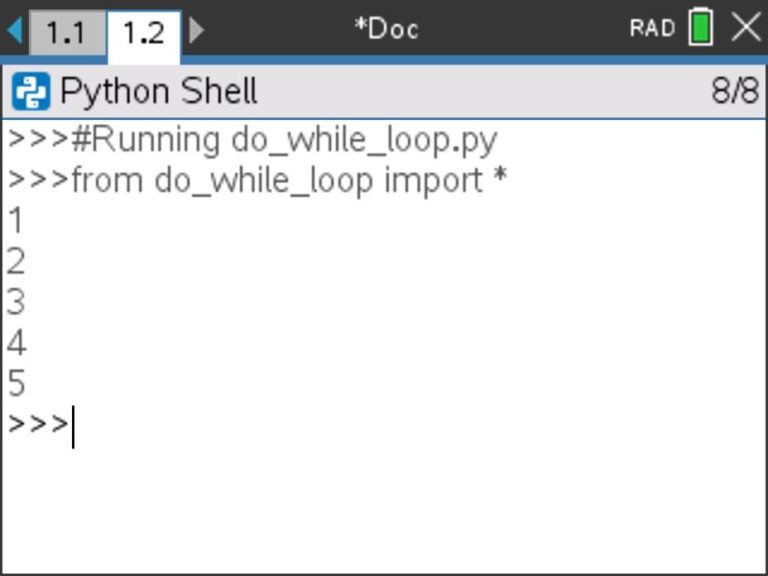 How might we edit the code for this program so that the output is:

Take a few minutes and play around with sample code that would yield those outputs.

Here are some screenshots of sample programs that would yield the outputs shown above. How else might these programs be written using a Do While structure? These sample programs are not the only ways to achieve the desired outputs. 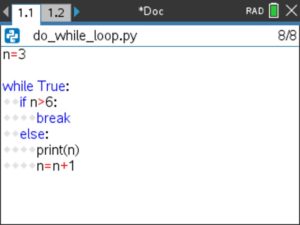 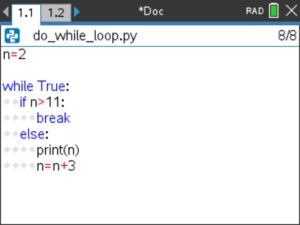 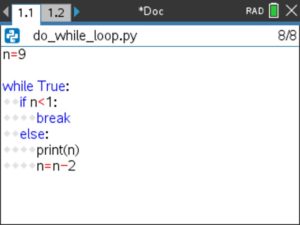 How is the Do While Loop structure different?

In light of the work we’ve looked at here with the Do While structure, we might consider the following questions:

Note that the Do While loop structure is always processed at least once, since it doesn’t have a condition that is checked prior to entry into the loop (here, we model this with a While loop where the initial condition is set to True). This is quite different than the For and (more general) While loops we studied in the workshop, as these loops have conditions that are checked before the loop is ever entered into (if at all).

Formalizing Do While loops

Let’s use an interactive notes page to formalize the Do While loop behavior that these structures model. 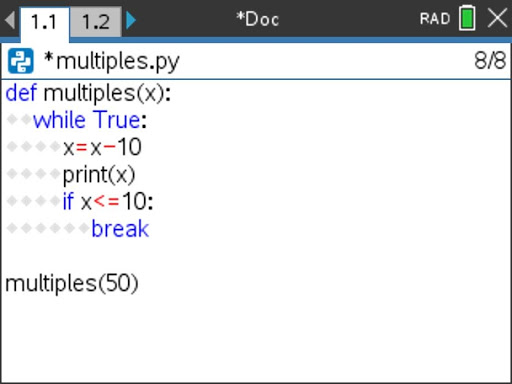 Here are two pictures of the Do While Loops notes page designed to capture our important learnings about Do While loops. This notes page uses the program multiples(x) that you just traced through above.

How does the output shown in the notes above match with your earlier prediction?

In this notes page, we’ve used a table to trace through the loop, noting the value of x, actions taken within the loop, and the check that is run during each iteration of the loop. Tracing a loop with a table might seem unnecessary in a loop such as the one shown here. However, this is an important strategy that can be very helpful when tracing increasingly complex loops.

Also note the identification of the four parts of the loop: the start of the loop (or initial value of x), the check (to see if the loop will exit or run again), the action (within the body of the loop), and the step (to increment x to its next value, moving closer and closer to the loop eventually exiting).

Lastly, consider how different initial values of x would have affected the output of this program. What if we had executed the program with a method call of multiples(0)? In this case, the initial value of x would have already been less than 10 (the If condition that leads to the break of the loop). However, since this condition isn’t checked until after the loop has already been entered (and, specifically, after the step and action commands in this particular loop), the loop would still run one time and would display an output of -10 before the loop exited. (Do you see why?) This is a great example of the fact that post-test loops (such as Do While loops, modeled here with a While loop) always run at least one time.

Reflecting on Do While loops

In this activity, we explored Do While Loops, a form of post-test loop that always runs at least one time.

The next activity in this series will consider all three loop structures (For, While, and Loop) in contrast to each other. We will explore how the Do While loop structure used here is similar to and different than a For loop and a While loop. Additionally, we will explore the use of counters and accumulators.