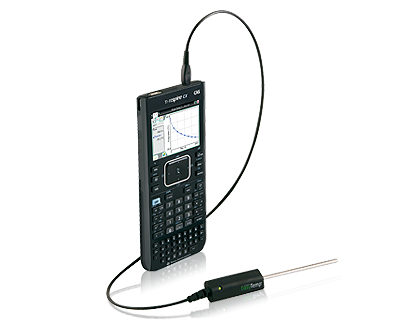 As soon as a sensor is plugged in, students can start to quickly and easily collect and analyze a wider variety of data such as pH, light, pressure, and more. The TI-Nspire™ family of graphing calculators automatically detects the USB EasyLink sensor and launches the Vernier DataQuest app to begin data collection.


Vernier DataQuest™ App for TI-Nspire™
For labs in which only one sensor is used at a time, the TI-Nspire™ handheld or computer software enables students and teachers to plug in a sensor through the EasyLink interface, press "Start," and begin collecting data. It's that easy.

Once the data is collected, students can use the integrated Vernier DataQuest application to determine whether the data is linear or nonlinear.
Prior to collecting data, they can use the "Draw Prediction" feature to test their hypothesis by drawing their prediction directly on the graph in which the data is displayed. Exploring nature with sensors has never been easier.


Vernier EasyTemp™
The EasyTemp temperature sensor, connecting directly to the USB port of any TI-Nspire™ family graphing calculator, offers an easy, accurate and inexpensive way to get students started with real-world data collection.

Note: in the image shown above, the VernierTM EasyTempTM sensor is not sold with the TI-Nspire™ CX CAS handheld.