Home | All other products

How do I prepare and charge a new TI-Navigator Type I hub?

Note: There is no damage to the batteries by leaving them in the charging bay beyond the time needed to fully charge them. Also, it is not necessary to fully discharge the batteries before recharging them. To preserve battery life, remove the network connectors if the hubs are stored for more than two weeks.

If there are not have enough (3-4) power outlets for the equipment received, obtain a power strip so that there are plenty of grounded outlets.

• Insert the small cylindrical end of the power adapter cord into the charging bay.

• Plug the other end of the adapter into a power outlet.

• Verify that the light on the power adapter is on.

• Insert each hub into the charging bay. The hubs can only be inserted in one direction. 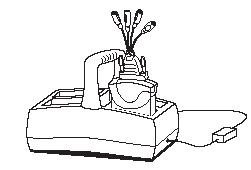 • Attach a network connector to each hub. Press firmly to make a good connection.

A power-status LED (a small light) at the top of each hub blinks or changes colors to indicate various power operations or status.


While the network hubs are in the charging bay:

• A blinking yellow light means the hub is waiting to be recharged.

• A solid yellow light means the hub is currently recharging.

• A solid green light means the hub is fully charged.

When fully charged, the hub is ready to connect to the classroom network.

For more information on connecting hubs to the network, see instructions in Knowledgebase Article #33092.