Best Practice From France: How To Start Programming With BBC micro:bit and TI Handhelds

Programming and teaching students how to code are an important part of the transformation of education in France. Four years after the start of this process, and a global pandemic later, two observations can be made that are also valuable for other countries in Europe. Firstly, teachers are willing to take up the challenge, but they are still very much in need of support. Secondly, numerous projects have been launched with the help of new tools to support both teachers and students to understand these new concepts. Among these tools, BBC micro:bit is popular, as is the TI-Innovator™ Hub with TI LaunchPad™ Board and the robotic vehicle TI-Innovator™ Rover.

Combining BBC micro:bit and TI handhelds at the request of teachers 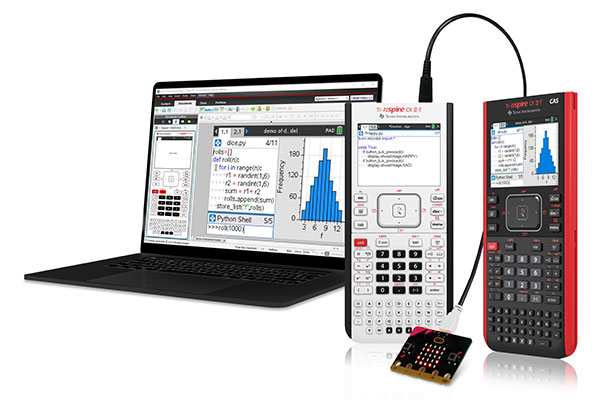 Programming the BBC micro:bit card was already an affordable entry point for reluctant teachers with little training in the subject. However, the constraint of needing a computer connection remained, because it was not possible to link directly to the graphing calculators. But this has recently changed, thanks to the TI-84 Plus CE-T Python Edition and TI-Nspire™ CX II-T graphing calculators. These graphing calculators can be connected to the BBC micro:bit, creating the possibility of direct programming. It is a development that was expected and requested by teachers. And an understandable one, given that the mini computer is inexpensive and compatible with different programming languages such as Scratch and Python.

Abdelilah Yazi, an ICT expert at a vocational high school, and trainer at two academies, regularly teaches colleagues who are just starting with programming. The option of connecting the BBC micro:bit and TI graphing calculators is, he said, an additional reason for using Python, especially for teachers who are reluctant because they have little training in programming. “I think it is positive that teachers and students can work with this combination of devices because it is easy to understand and use,” he said. “In addition, students are able to create scripts themselves and see the result immediately on the micro:bit, in an interactive and autonomous way. It is motivating and educationally interesting.”

Yazi, who is also a T3 instructor, recalls the time he was teaching a group of teachers with no experience whatsoever with programming in Python. “At the end of the session, they managed to create functional programming scripts using the BBC micro:bit connected to the handheld,” he said. “The teachers were particularly pleased with the use of the radio link between two cards, all developed in Python. The handheld assists in programming, whereas the computer requires you to know in advance what instruction you want to give. The handheld is a real asset. It makes it easier because the instructions are ready.”

The T3™ instructor is also co-author of a French booklet outlining 14 physics and chemistry tasks that can be carried out using the BBC micro:bit and a TI graphing calculator. He described one experiment he worked on with the teachers — designing an alarm for a desk drawer:


“This is a challenging activity for the students, and it can be done without any experience in Python because the programming is guided by the calculator,” he said.

The original article has been shortened and adapted for the T3 Edublog.