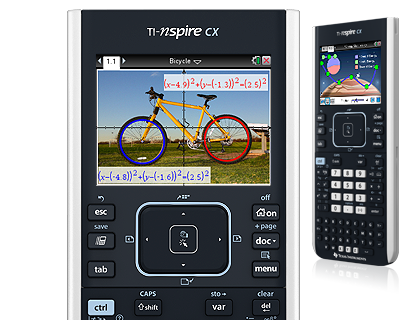 With the built-in Press-to-Test feature on TI-Nspire™ handhelds, you can easily comply with the rules for the use of calculators in exams by temporarily disabling all current documents and denying access to programming libraries.

A blinking LED located at the top of the TI-Nspire™ handheld provides invigilators with a way to quickly and confidently see that a candidate's handheld is operating in Press-to-Test mode. After the exam, handhelds are easily restored for classroom use by exiting Press-to-Test mode and all previously created documents restored.

The new Press-to-Test feature is only available with TI-Nspire™ operating system version 1.3 or higher.

Select OK. The handheld will restart and the Press-to-Test confirmation screen will appear.

Connect the device to another handheld or computer Navigate to My Documents.

On a TI-Nspire™ with Touchpad or CX handheld

Note: Only a device connected to another handheld or computer can exit the Press-to-Test mode. Before you begin this process, you must have access to another TI-Nspire™ handheld with an operating system of 1.3 or higher.

The Press-to-Test feature also works with the TI-Nspire™ handheld's interchangeable TI-84 Plus Keypad. Programs and Apps not allowed during testing will be temporarily disabled and then restored after the exam.